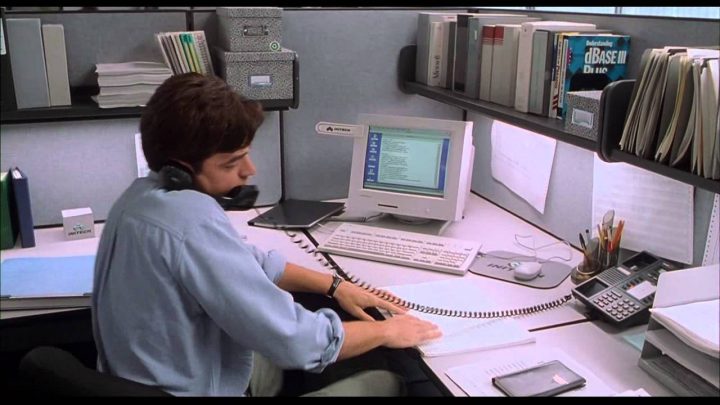 This post might be a nostalgic one, as I was wondering the other day what tools did we use those days for communication, and how we could survive without the constant news and media flow from the internet and our Iphones in our hands. And it was not more than 20 years ago.

My first job as product manager back in 1998 at an IT distribution company in Budapest, Hungary, was about the same time when Office Space movie is set in time.

Watch out gen X folks, communication was made 100% over fixed line phones and email!

Of course there has been some news portal, but besides scanning them before or after morning coffee, we did not spend too much time with them.

How was the time when the internet was merely used for work only, but not for entertainment and instant communication?

I have to mention our Hungarian social network initiative called iwiw, which could have been the grandfather of FB, still the new social media killed it by the middle of the decade. I remember I was a user with a dozen contacts, but apart from making connections, it was mainly good for nothing, No wonder that people did not spend much time on this platform.

Before Facebook booked a certain daily schedule of our online existence, it was not felt to be missed at all.
People were able to be connected personally, or using a recommendation of an acquaintance. Moreover in the dawn of the “cold calls decade”, some were able to be connected just by a simple phonecall.
There was no chance to check people online, get a picture, read work history and preferences of  movies or literature. Life was more offline, though a big chunk of daily work was done on the computer, we used
B2B order sites for placing orders for our vendors.
That kind of FOMO feeling was not known at all, as yet that days there was much less happening online.

Actually I’m big fan of LinkedIn, an active user since 2007, though business was going before it.  LinkedIn used to have a fame period when most people believed it can get you a better job. Well, I cannot validate this, but on the other side, Linkedin is not a Facebook in suit and ties, but a successful social platform for receiving and sharing business content and making useful connections.  Nowadays, I still use it to get information on our industry and post our events and making new contacts. After all, that’s why editors added LinkedIn share button on all business portals. Though, my contact list was saved in Outlook  those days and people had signatures with their address, phones (1 for fixed like, 1 for mobile) , different emails, too, but signing as Andy, John or Simon, so you need to write back to ask for contact details.
Outlook is still far more convenient to manage your contacts. For example where’s the function in LinkedIn to export to xls?!
Oh, another thing for contact management. I used to have huge piles of business cards, which is not in fashion today, but ultimately if I wanted to use them I had to type them to Outlook. Then maybe we never contacted again…

Anybody could check now how much he or she spends on digital media as of today. It’s is not consoling that we watch less TV.  It’s no question we spend more than we should, and of course giving bad examples for our kids.

Looking back to the 2000s we spent much much more with “live Facebook” – talking face to face, in person.
If somebody was away, we lifted the phone and called the person instead of trying to chat by messages.
I’m not saying our conversations were much more efficient, thoughtful or emotional, but being so priviliged to be part of X generation, I’ve lived in best of both worlds in my adult age.

There was no approved protocol for online chat (ICQ was a good example widely used), and you did not expect your peer to be online 24/7. Why? Because we had beginning and end of the working ours (plus cigarette and lunchbreaks).
Being online was no more than a status marker in his application, but not an inevitable need. There were certain things like emailing for which we had to be online, but not around the clock.

Do you remember what Peter Gibbons is playing on his old fashioned computer when Lumberg walks to his desk? You got it right, it was Tetris. Tetris started the stream of  highly addictive computer games , though I got bored quite soon, as both visual and audio effects were pretty primitive, one could make some fun time  (sometimes during business hours).
Soon after this period the geeks started to organize LAN parties: buddies brought their own computers, connected to the network, ate pizza from the desktop, drunk Redbull and vodka and played till they fainted. If you are into the mysteries  of that era, internet remembers well. So addiction was developed together with the processing capacity of the Intel chipsets. Better entertainment, better visuals and sounds, more time spent with games.

Our use of (fixed-line) telephone was so much different then. Often happened that you called a person, who was no at his desk (sure, as he did not have a mobile yet!)
Caller left a message, and he was called back later. Insane, huh?
Even with such limitation os communication channels we might felt more productive as of today.
Simply because there are so many social media interactions take away our focus, and we still have the same hours in a day as in back in the 2000s.
Mobile communication made a great change. I can’t remember anybody making call on cellphone in Office Space. As it was not common those days.

Honestly, I did not have a mobile until 1999, and I was able to manage 9 different vendors distribution product lines to have sufficient stock and sales. Note that subscription fees and cost for minute was also quite expensive.
And we have not dreamed on mobilenet, when even mobile coverage was an issue in certain geographies (I mean leaving the city).

Internet from the wall

Internet access was not a utility, but a privilege. It was not common at all, and private home access was not usual, either. At least with me, it was not. In 1999 only 62.000 private subscribers had internet in their homes with modem. You could use the phoneline and get connected to the internet from your provider. I remember we were selling 56K modems – at the price of a current smartphone – and before the time of Wifi there was a need to add a thick cardsize modem to get any network connection on your laptop weighed 6-8 kgs.
Connection was slow, unstable and often cut. Just for the comparision literally NOTHING in 2019 would works with a 56K modem but would result a jumble of links and text. There was not Youtube, but loading a YouTube video could have been
just a static background image and sound. Everything took minutes, not seconds, a standardized form of streaming media (Flash) wasn’t even accepted at large until 2002 and YouTube didn’t emerge until 2005.

That’s how people of my age learned patience.