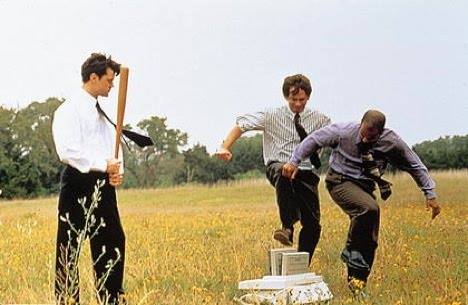 The hated objects of your office

Its one of the most epic scene of the movie, when the Initech employees are smuggling the printer out of the office and smash it to pieces outside on a field. The rap song from Geto Boys just creates a great contrast between the look of office geeks  and violence of the lyrics of the gangstas while they are obsessed with the murder the symbol of their job misery.

Actually we all see how technology is raising our stress level at work.
Technology  at the beginning was following the evolution of mankind, but after some point, maybe when first steam trains  replaced horses, people could not keep pace with technological development, and our frustration started.
We use the technology but do not understanding how it works.

Technology became so complex that there are very few people  actually do understand how what’s makes a machine working, what is the secret of operation. Back in the 2000s a perfect example for the object of office frustration  was a printer with incidental paper jams and meaningless error messages.

Note that Michael Bolton is a hardcore IT guy, but handling a printer is far too big task for him to handle. Office folks just want to use technology without any complications, after all technology is to make humans more efficient and productive. Therefore they get very stresses if things are out of hand – having a PC or a printer error, forcing you to wait for service or trying to repair yourself and thinking you cannot finish your work and ultimately you are not going to get home by dinner, damn it.
The subject of anger is also inhuman, you cannot pour your rage of a certain person with feelings when its nobody’s fault, but a machine. You can yell at it and curse but you can’t hurt its feelings. That’s why IT support guys’s job is so hard, as being the first human to tell about the mental frustration of the users is pretty though.

So what represents the smashed printer?

Our office frustration we could not release on our bosses – as they are standing  higher in office hierarchy – or on annoying collegues we have to bear day by day? Or its a revenge on technology which sends humans to space but you cannot comprehend  it any more due to its complexity? Revenge because technology has seperated our from natural state of man living in harmony with Mother Earth and forced us to spend our time in cubicles of offices? Stress relief when finally the guys decided to leave the hated company and the printer represented everything which has not worked well in their life? Just once they wanted to feel the power of superioity of Human over Technology and celebrate victory of Mankind? Maybe some bits of all, who knows…

But God, releasing the steam by a good wrack-a-printer session just feels perfect.